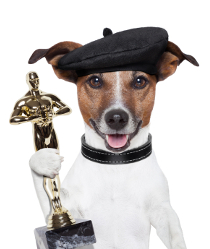 Next year sees the 75th anniversary of one of the most iconic films of all time – The Wizard of Oz. This wonderful film also created the first canine icon of the ‘Talkies’ in the form of Toto, Dorothy’s beloved dog. Since then, several other four legged movie stars have emerged and many memorable characters have been globally celebrated.

The most famous showbiz dog of all time is undoubtfully MGM’s Lassie, originally portrayed on screen by Pal the Rough Collie in 1943 and later by a succession of Pal’s descendants over 8 generations. Interestingly, while the character is female, Pal, as well as all other dogs that played Lassie over the years, was actually male. This was because male Collies have thicker coats, which look better on screen. Several generations of children have grown up watching the Lassie films and television series and you will be hard pressed to find anyone who’s not heard of this beautiful, clever dog. Lassie also made insurance history, when the beloved Collie (portrayed at the time by Pal’s descendent The Old Man) was covered by the first pet insurance policy ever sold in the USA in 1982.

While Collies are widely thought of as the most intelligent breed, many other dogs have also carried entire productions on their little shoulders. Like Lassie, Beethoven, the boisterous St Bernard, proved such a success with audiences that he ended up starring in no less than 7 films, and a TV series to boot. In 1989 Hooch from the Tom Hanks hit Turner and Hooch arguably stole the film from under the talented actor’s feet and the animated All Dogs Go to Heaven took children everywhere (and some adults no doubts) on an emotional rollercoaster. More recently, Marley from the box office smash Marley and Me has become so much of a cult hero that Jonah, one of the gorgeous Labradors who play Marley in the film, was not excluded from promotional duties.

Disney has provided us with a very long list of famous animated characters, amongst them Goofy, Pluto, the many hundreds of Dalmatians, The Lady and the Tramp and a string of hilarious canine sidekicks, such as Percy the Pug from Pocahontas. Outside of the Disney Studios, Snowy of Tin Tin fame, Snoopy and Scooby-Doo give Lassie and Beethoven a run for their money as the most popular and well known dogs of all time. While these animals are clearly not real, they have been cherished by people the world over as if they were not only flesh and blood, but the personal pets of every one of us.

Like with a lot of Disney animations, Hollywood has always had a fondness for lively four legged sidekicks to complement the main characters. Who can help but fall in love with the adorable Chihuahua Bruiser from Legally Blonde (who was so popular he took centre stage for the film’s sequel), the hapless sheepdog Einstein from Back to the Future or the… err… affable Moses from Meet the Fockers.

Not to be outdone, television has also given the world several beloved canine stars. Eddie in Frasier, Bouncer in Neighbours, Vincent in Lost, Santa’s Little Helper in The Simpsons, Brian in Family Guy and the aptly name Dog in Columbo are just a few examples.

It is impossible to talk about TV dogs without a special mention of Blue Peter. Over the years, various animals, the majority of which being dogs, have graced the screens of the hugely popular show. Petra, the show’s longest serving dog, was the first ever television pet and appeared on screen for a remarkable 15 years, from 1962 to 1977.

While the breed of most on-screen pooches, even the animated ones, is easily recognisable, some require a bit more imagination. Never is this more the case than with The Muppet’s resident-pianist Rowfl. While his musical talent in indisputable, his breed remains a mystery.

That said, whether pedigree or mongrel, stray or pampered pooch, four legged stars of the big and small screen alike have captured the hearts of audiences all over the globe for close to a century (they were very popular during the silent movie era in Hollywood) and will no doubt continue to delight, fascinate and move billions of viewers every day for years to come.

"the insurance catered for older dogs and also included dental cover. it was also a good deal cheaper than my present insurance"

As dogs get older, vet treatment becomes increasingly likely. As a result, many pet insurance co...

Are The Saturdays using this weird trick for multiple dogs?

The Saturdays is one of the most successful British girl bands in history. With five studio album...