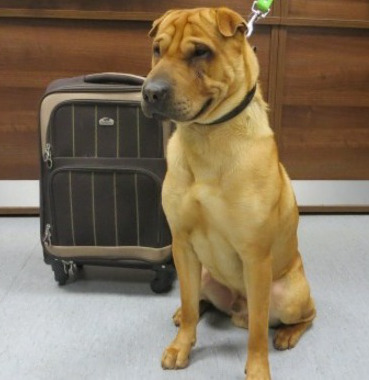 Update: Kai has now been adopted by Ian Russell from Newton Mearns in East Renfrewshire. We wish both of them a long, happy life together! You can find out more details in this BBC report.

A dog has been found abandoned at a railway station alongside a suitcase of his belongings.

Kai, a male shar-pei crossbreed, was discovered tied to a railing outside Ayr station in Scotland on Friday - alongside luggage containing a pillow, toy, food and bowl.

The Scottish SPCA used a microchip to uncover his name and contacted the registered owner, who said he had sold Kai on Gumtree in 2013.

"Fantastic service! Recently changed to Bought By Many and from the initial quote to handling the claim the speed and service has been fi..."

Key Petplan policy features Petplan offers a choice between three policies and up to £12,000 v...

The five cheapest and most expensive dog breeds to insure

We’ve updated our list of the cheapest and most expensive dogs to insure using new data from Mone...