Toxic blue-green algae warnings were recently issued across the UK after four dogs died from swimming in contaminated water.

The highest level of vet fee cover you can get

With £15,000 of lifetime vet fee cover, Bought By Many's Complete pet insurance is the most comprehensive policy in the UK.

Although the last case was reported in August, we are still in the peak algae season so we've got some tips to help you recognise affected areas and understand exactly what blue-green algae are and how they can affect dogs.

Here's everything you need to know.

What are blue-green algae?

Blue-green algae is the common name of cyanobacteria - microscopic organisms naturally found in all types of water - fresh, salty and mixed.

Cyanobacteria produce one of the most powerful poisons in nature and can make dogs very ill if they are exposed to it by drinking or bathing in contaminated water. Not all cyanobacteria are toxic but it is impossible to tell if a bloom is safe just by looking at it.

The bacteria photosynthesise to make their own food and multiply. They increase in numbers in the warm months of the year when there's plenty of sunshine; but they can also occur at other times of the year due to excess nutrients in the water.

When they become concentrated in the water an algal bloom forms. "It is then when blue-green algae are in their toxic form", warns veterinary surgeon Dr Neerja Muncaster.

When to be on the lookout for algal blooms

They are most likely to be found in slow-moving waters such as lakes, ponds, slow-flowing rivers and near shores.

You can usually tell when water bodies have been affected by an algal bloom because a scummy pea-soup-like mat forms on the surface. It might also look as if someone has spilled green paint in the water. It is usually green but can also be bluish, yellow, brown or red.

Everything you need to know about Alabama Rot.

However, Dr Muncaster told us that toxins can persist in the water for a while after a bloom so a lack of visible signs on the water does not guarantee it is safe.

She advises owners to take heed of warnings in the area and look out for signs of a recent bloom such as scum along the shoreline to prevent dogs from drinking/swimming in potentially contaminated water bodies.

Dr Muncaster encourages owners to contact the Environment Agency if they spot signs of blue-green algae in the water but no warning signage.

Toxic blue-green algae can cause heart, liver and neurological problems in dogs. Exposure is often lethal which is why you need to seek immediate veterinary help if your dog shows signs of being ill after it's had contact with water during a walk.

Dogs can become ill after drinking or swimming in contaminated water so try to avoid places where algal blooms have been reported and keep an eye out for signage.

If you suspect your dog has been exposed to blue-green algae contact a vet immediately.

"There is no antidote for the toxins produced by blue-green algae so early, aggressive veterinary treatment is essential for the best chance of success," says out-of-hours vet clinic Vets Now.

How to protect your dog from blue-green algae

Local authorities usually put up signs to warn pet owners in areas where algal blooms occur. Keep an eye out for a sign when you see a pond or a lake that your dog might want to play or swim in. 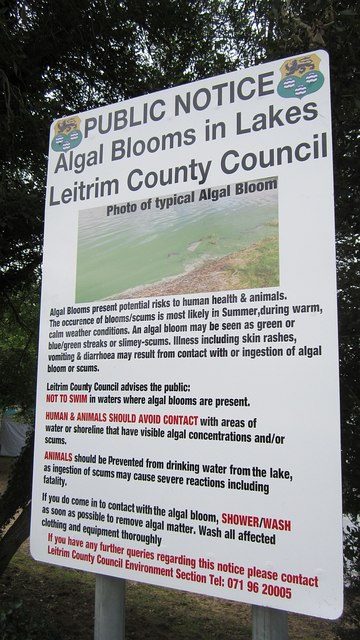 Be on the lookout for the scum-like mat of algal bloom on the water and avoid affected areas. Bear in mind that the lack of visible build-up of algae does not always mean the water is safe so looking out for signage is very important.

If you happen to be walking through an area known to have an algal bloom, keep your dog on a lead.

It is best to always wash your dog with clean water after it's been for a swim even if the water looked fine.

There is currently no known antidote to blue-green algae toxins so prevention is key.

The British Veterinary Organisation is advising owners to keep their dogs on a lead around waters in affected areas.

It is true that not all blue-green algae are toxic, but Dr Muncaster advises caution: "There are numerous types of blue-green algae and most are not toxic; however, only testing can determine if a bloom is toxic. Therefore, it is best to presume that all blooms are potentially toxic."