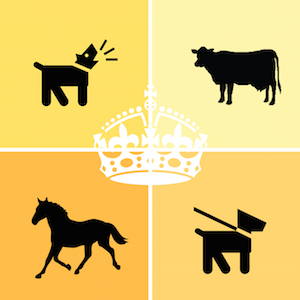 Half of all UK households own a pet, which puts the UK pet population at a whopping 20 million, according to the RSPCA.

But how many pet owners have heard of these weird and wonderful laws, which include rules that date back to the 1800s.

We’ve drawn up a list of 7 unusual pet laws that exist in the UK. A couple of these may leave you scratching your head. It's not a legal requirement to have pet insurance but if you're interested in cover for your pets we've found the best pet insurance policies.

According to UK statute it is illegal…

1. Not to carry a waste bag when dog-walking 💩

Daventry Council, in Northamptonshire, have slapped dog-walkers with a potential £100 fine if they walk their dog without carrying a bag to dispose of its waste. Even if you get stopped after disposing of a used bag, unless you have a spare, you will be liable for the fine.

So be sure to always carry an extra bag or face the prospect of keeping a used bag on you until you get home to avoid a fine.

Beware if you’re strolling along the Lancashire Coast with your pup. Unless instructed by a police officer, it is illegal to incite a dog to bark.

3. To let your pet mate with a pet from the royal house 👑

It was an executable offense to allow your pet to mate with a pet of the royal house without permission.

This law dates back to before George I. Although the death penalty was abolished in 1965, the offence is still punishable so keep your pups on a tight leash when the Royal entourage is in town!

4. To drink and ride a horse or cattle 🏇

Under the Licensing Act 1872, it is illegal to be “drunk while in charge on any highway or other public place of any carriage, horse, cattle…” If you find yourself responsible of either after you’ve had a drink be sure to have a designated rider on standby.

Speaking of cows, according to the Metropolitan Streets Act of 1867, 'no cows may be driven down the roadway' between 10am and 7pm unless it has been approved by the Commissioner of the Police.

6. To have a pigsty at the front of your house 🐖

From micro to jumbo, pigs are rising in popularity as pets in the UK but did you know that keeping them at the front of your house is a criminal offence?

According to the Town Police Clauses Act 1847, it is illegal to have a pigsty at the front of your house (unless it is ‘duly’ hidden.)

7. Not to microchip your dog 💻

OK, we know this one isn't particularly bizarre, but it is a new law and not everyone has heard about it.

This year the government introduced the Microchipping of Dogs Act (England) Regulations, which states that all dogs must be microchipped.

Read our guide to what the new microchipping law means to pet owners.

"Just bought my travel insurance. It was the cheapest quote given to me. It was not cheap but I knew it wouldn't be. Am happy x"

The following list presents the 10 bet pet insurance policies on the market in general. For cat- ...

If you have 2 pets (or more!), it's possible to save money by insuring them together on a multi p...

Winter is a magical season - with Christmas, New Year and the chance to sit in a warm house with ...

How much is pet insurance?

On average, UK pet owners spend about £15 per month on pet insurance. However, this number varies...